The best riders are there!

Whether they have come from the Netherlands, the United States, Portugal, Great Britain or any one of 22 nations that have travelled here, the biggest names in the discipline have accepted the invitation of the 9th Internationaux de dressage of Compiègne which are taking place until Sunday deep within the Compiègne forest. The event again promises some great sport with the Crédit Mutuel Nord Europe CDIO5* which acts as host to the FEI Nations Cup, which has 7 teams entered. The CDI3* opened festivities this morning at 8am along with the CDI2*, the Young Riders CDI, the young horses and the ponies, Juniors and Children! 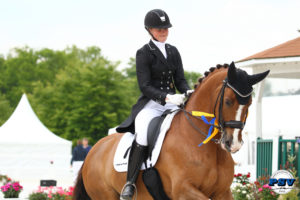 The high point of this first day, the Grand Prix – Engie Réseaux in the CDI3*, a qualifier for the Grand Prix Special and the Grand Prix Freestyle, saw a number of top of the bill names in the main ring. Eagerly awaited, the German champion Helen Langehanenberg, 4th on the World rankings, took advantage of the 3* competition to start Hollywood 48 on the international circuit. The pair left the arena with an average score of 65.652 %. She can be seen again tomorrow in the Crédit Mutuel Nord Europe CDIO5* with her top ride Damsey FRH.

The honours went to Sweden’s Malin Wahlkamp-Nilsson at the reins of Eddieni. A rider for Oustanding Stables under the auspices of the star Patrik Kittel, she was alone in scoring over 71 % (71.565 %), brilliantly taking the lead in front of the other 32 competitors in this class. « There’s still lots of things to improve but I really enjoyed riding him today, he’s amazing! ».

Achieving 70.457 %, the very experienced Emma Hindle (GBR) took second. The rider who competed at the Olympic Games in 2004 and 2008 (6th individually), rode a test with Romy del Sol that was much appreciated by the judges, a good omen for the rest of the weekend. Next, Ireland’s Heike Holstein and Sambuca, who were recently placed 3rd and 5th in the Grand Prix and Grand Prix Freestyle at the Windsor CDI4*, were again 3rd with 70.435 %.

British sensation, whom we can already imagine being Charlotte Dujardin’s successor, the young Charlotte Fry (23 years old), once again had people talking. Double gold medallist in the U25s World Cup in 2018 with Dark Legend, she was today partnering the magnificent black stallion Everdale and rode a test scoring 70.413 % offering herself 4th place. Tomorrow, for the very first time in her career, she and Dark Legend will be representing Great Britain in the senior team in the Nations Cup – CDIO5*.
Good performances from the home nation too as Nicole Favereau and Bertrand Liegard finished 5th and 6th respectively on Ginsengue and Star Wars with scores of 69.370 % and 68.891 %.

In the CDIY – Prix Saint Georges ARC – for Young Riders (16-21 year olds), it was the Netherlands’s Kimberly Pap on Vloet Victory, 4th individually and a member of the winning team at the European Championships at Fontainebleau, who dominated, achieving 72.196 %. She finished ahead of Elizaveta Lyban/Erantos (RUS), 2nd on 71.569 % and Rebecca Swain/Bon Jovi (GBR), 3rd with 71.471 %.

Checkmate for Annabella Pidgley (GBR) in the Pony CDI. Already victorious with Cognac IX in 2018, the 14 year-old showed spectators at Compiègne that they should again count on her by taking 1st place today. She concluded her test on 71.048 % in front of strong competition, the current European champion, Lara Van Nek (NED), who took 2nd and 3rd on her two rides, Baumann’s Despino (69.619 %) and Brouwershaven’s Nairobi (69.143 %).

The CDI2* – Prix T’AIM Hôtel brought this first day of competition to a close with a 100% women podium. Charlotte Fry (GBR) finished well in-front of the rest of the field in the Prix St-Georges scoring 77.353% having chosen France in order to start Glamourdale, the 2018 World 7yo champion, at this level. She was followed by her fellow compatriot Jessica Dunn/Alicante Valley (72.529 %) and Charlotte Lenherr/Sir Stanley W (71.882 %) for Switzerland.

More tomorrow, notably with the start of the CDIO5*, with its’ first class, the Grand Prix. The occasion to admire top level dressage at an event that is unique in France.

Times, start-lists and results at https://www.worldsporttiming.com/results/timing-1105.html
LIVE streaming of the CDIO5*, CDI3* and CDI YH on www.chevaltv.fr