The 11th edition gets off to a flying start

Charlotte Dujardin, Adelinde Cornelissen, Patrik Kittel, Charlotte Fry,… the stars of the 2022 event all made a strong starts to the weekend. 21 classes, 7 categories and nearly 200 riders, the 11th Internationaux de Dressage of Compiègne saw the best stand out already this Friday. The highlights of the day were the two CDI3* qualifying classes for the Grand Prix Special (GPS) and the Grand Prix Freestyle and they left little room for outsiders. Great Britain’s Gareth Hughes and his brilliant Classic Briolinca were the first to ride into the test leading to the GPS on Saturday. Awarded a score of 76.152%, they were unrivalled and ahead of one of the weekend’s big favourites, Sweden’s Patrik Kittel on Blue Horse Zepter (75.782%). The Scandinavian rider who was determined not to be robbed of the limelight at one of his favourite playing fields,  went on to win the Grand Prix qualifier for the Freestyle! The competition is already proving to be of a very high level as the CDIO5* and its FEI Nations Cup get underway. 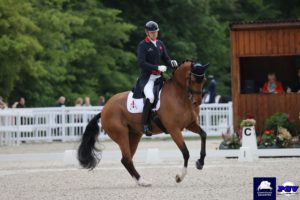 An experienced pair, Gareth Hughes and Classic Briolinca returned to the imperial city after a great victory in the CDIO5* Grand Prix Special which had allowed Great Britain to take the Nations Cup in 2019. Absent from the arenas for more than a year, the mare made her comeback this morning and brilliantly showed pirouettes, piaffer, passage,…, to obtain 76.152%. “Being first to go I was lucky enough to have ridden before the storm” laughed the rider. “This is her first competition after several months off due to injury and she was really incredible! She’s a very experienced mare, during the warm-up and at the beginning I felt her a little tense but as the test progressed she gained confidence and relaxed. She’s brilliant and has so many strengths! I think she’s definitely back! Tomorrow we’ll be competing in the GPS, so obviously I’d like to have the same result, the priority is for Classic to stay in a good frame of mind and to do a test with as much confidence as today!”
A first victory for Great Britain who also took 3rd place thanks to Charlotte Fry and her impressive Dark Legend (73.543%), and also 4th with Olympic champion Charlotte Dujardin and her young Imhotep who had a successful first international outing attaining 72.804%.

Sweden’s Patrik Kittel, constantly seen at prize-giving ceremonies here in Compiègne, didn’t disappoint today. Riding his partner from the World Cup Finals in Leipzig, Blue Hors Zepter, he rode a test scored at 75.782% to finish 2nd. To be noted, the 5th place of the London Olympic silver medallist, the Dutch Adelinde Cornelissen with Aqiedo (71.783%). The best performing rider representing the home nation France was Charlotte Chalvignac with her Lusitanien, Icaro in Figueiras, 9th with 70.152%.

Patrik Kittel has struck again! The charismatic Swedish rider has once again shown that he should be taken very seriously at the 11th edition of this competition held in the Hauts- de-France region (FRA). Partnering for the occasion Forever Young HRH, he rode a fluent test despite the poor weather conditions in the lovely Grand Parc arena. The mare, who made her international debut just a few months ago was already remarked upon at the s’Hertogenbosch leg of the World Cup (March 2022) by finishing the Freestyle with 82.500%, a score that bodes well before tomorrow’s Grand Prix. With 74.543%, he was ahead of the rider who won the GPS at both the Zakrzow (POL)  and Kristiansand (NOR) CDI3*, his compatriot Jeanna Hogberg, 73% with Astoria. The Dutch rider Karen Nijvelt, scored 71.696% with Elysias and was third. Just like this morning, the highest placed French rider was 9th, Arnaud Serre with Alquazar de Massa,  who are showing together good consistency at competitions

First international competition and first victory for Dante’s Herzchen ridden by the experienced Lyndal Oatley. A familiar face at 3* and 4* prize-giving ceremonies, the Australian has added a superb recruit to her string. She imposed with the young 8 year old mare, in front of the other 25 competitors, by riding a test that was rewarded with 71.441% in this Prix Saint Georges. Holland’s Seth Boschman was 2nd on Flora de Mariposa RS2 OLD (71.324%), and Great Britain’s Dylan Deutrom, 3rd, with San Marco (70.882%).

Giving pride of place to the hopefuls of the discipline, the Internationaux de Dressage of Compiègne is again hosting classes open to riders aged 25 and under. In this category (CDI U25), Benjamin Ebeling, who will be representing the United States tomorrow in the CDIO5* – FEI Nations Cup with his other horse, took the lead on Status Royal Old (70.555%),  he was followed by Germany’s Paulina Holznecht, 70.128% with Entertainer Win T and Theodora Livanos, who was 3rd for Greece riding Robinvole (69.402%)

In the ponies, Liezel Everars, 4th in the World rankings in her category, won with her very good FS Capelli de Niro. With a score of 74.238%, the 15 year old Belgian rider finished well ahead of her French and Dutch rivals, Lou Eden Commenge/Oscar (69.952%) and Isa Hollands/His Royal Badness DK (69.476%).

Mathilde Juglaret concluded the day by offering France a first victory in the Junior CDI with her stallion Caporal de Massa. Ranked N°3 in the World in this category, the French Junior and U25 national champion has certainly not finished making a name for herself. Leaving the arena with 72.525%, she took control of the class in front of Belgium’s Clara Collard who was riding Escape, 71.263% and Switzerland’s Robyn Graf on Domino, 70.808%.

Tomorrow, Saturday the 21st of May, the competition goes up a notch with arrival in the arena of the CDIO5* riders and the 9 FEI Nations Cup teams. Start of classes at 8am!