Led by the great Patrik Kittel, Sweden asserted itself in a Nations Cup marked by the elimination of the Danish couple, ranked 6th in the World, Cathrine Dufour and Bohemian. The podium was completed by the surprising Portuguese, second, in front of Great-Britain.

The battle was expected to be fierce. At the end of the Ville de Compiègne Grand Prix on Saturday, Sweden and Denmark were indeed only separated by a tiny point, and far ahead of the other nations. But on Sunday, last day of the 10th Concours international de dressage of Compiègne, organised at the Grand Parc equestrian stadium, the suspense didn’t last long. In the Grand Prix Special, Denmark’s Cathrine Dufour was unable to persuade her gelding Bohemian to enter the arena. A huge disillusion for the rider, ranked 6th in the World with this horse previewed to contest the Tokyo Olympic Games, but also looking to find her marks outside having not competed in the open air since July 2019, at Aix-la-Chapelle. This elimination of the rider and consequently her team, prematurely bringing to an end Danish hopes in the Nations Cup.

Sweden didn’t let the opportunity escape them. Respectively 2nd and 4th in the GPS, the two Ramel sisters, Juliette on Buriel K.H. (76.681%), and Antonia with Brother de Jeu (74.787%), perfectly fulfilled their mission.

At the beginning of the afternoon, under the lovely blue sky that had prevailed throughout the three days of competition, Patrik Kittel, already the winner the day before in the Ville de Compiègne Grand Prix, concluded in style this 10th Compiègne dressage show, by taking the Crédit Mutuel Nord Europe Freestyle Grand Prix with Well Done de la Roche CMF (81.455%). 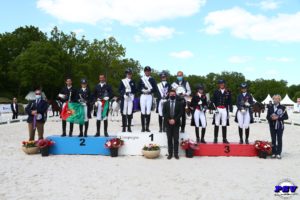 Sweden therefore wrote it’s name for the second time in history on the list of winners of the Compiégne Nations Cup, after a first success in 2018. “A win is always important, confided Bo Jena the Swedish chef d’equipe. More so this year, following more than a year with barely any competitions. It was important for the team to come together. The horses are on form, the riders too, everything’s going well. We’re now going to compete at Le Mans in two weeks time with a team that will be undoubtedly a little different, as we’re going to concentrate on training at home,  the big dates to come will arrive quickly, with, in addition, the quarantine to manage before leaving for Japan.” An Olympic Games, approached with a few ambitions. “In Sweden, we don’t talk about medals, stated the trainer. Nous We just know we can be among the best. Next, the riders ride and the judges… judge.” The Swedish succeed Great Britain, “only” third, with however, the pride of the very good performance of Charlotte Fry in the GPS (3rd on Dark Legend with 76.106%). The British were indeed overtaken by Portugal, led by 28 year-old Joao Miguel Torrao, who achieved an excellent excellent second place in the Freestyle Grand Prix, with Equador, a 12yo Lusitanian stallion  (77.490%) who has already given him a sixth place in a World Cup (Malines, in 2019). On equal points after the three classes of the CDIO 5*, the final placings of the two nations were attributed by the results of the Grand Prix, with the advantage going to the Portuguese.

The French, who were in the shadows on Saturday in the Grand Prix, saw Maxime Collard coming forwards and achieving a good 7th place in the Suez Grand Prix Special with his KWPN stallion Cupido PB (71.128%). The 11th place of Isabelle Pinto on La Gesse Hot Chocolate VD Kwaplas (69.660%) and the 11th of Alexandre Ayache in the Crédit Mutuel Nord Europe Grand Prix Freestyle with Farao de Raia (67.110%) permitted France to finish 5th nation. “It’s an honourable result, said Emmanuelle Schramm, the deputy national technical manager for dressage in France. The French team performed well. We had a difficult start as we had to make changes following one of our horses being withdrawn. The organisers and the FEI authorised his replacement at the last minute and this changed a lot of things. The three riders adapted well to these changes. There were some highs and lows of course, but finally, looking at the list of entries, fifth isn’t so bad. We’ve still got a selection event at the CDI 4* at Le Mans in two weeks time and then it’ll be time to make decisions and announce the selections for the Olympic Games.”

Julie Sofie Schmitz-Heinen will have happy memories of her trip to Compiègne. With her 11yo pony Carleo GO, the German had a grand slam, taking all three classes that make up the competition. Sunday in the Freestyle, the young 14 year-old confirmed her supremacy, having the unanimous decision of all three judges and the excellent score of 79.417%. “I’m really surprised, confided very shyly the rider who is based near Cologne. I didn’t think it would be possible.  I’ve had this pony for 3 years and he’s eleven now. It’s only a year and a half we’ve been competing and it’s my first international competition. He can sometimes get very excited but when he’s competing with me he’s becomes very cooperative. It’s quite incredible. We’re going to take part in our first Nations Cup in two weeks time at Hagen (GER) and after we’ll see. The aim is just to clear the various stages one by one.” In addition de Julie Sofie, Germany monopolised the first four places with also on the podium, Maleen Kohnle on Dabia Dio (78.283%) and Antonia Roth with Daily Pleasure We (74.858%).

CDI U25 : The Eurovia Freestyle Grand Prix for Estelle Wettstein

Junior European team champion in 2013, and already present on the World Cup circuit and at major international shows with her top ride West Side Story Old, 24 year-old Estelle Wettstein, riding Great Escape Camelot here at Compiègne, took control in the Eurovia Freestyle Grand Prix (73.885%). She made her presence felt finishing in front of Portugal’s Francisco Vila Nova on Sir Saburo (73.080%). Holland’s Jeanine Nekeman with Ferrari, already second in the Grand Prix on Saturday, completed the podium with a score of 72.915%.

Third on Friday, triumphant on Saturday,  partnering her KWPN Fame, Belgium’s Amber van den Steen offered herself a new win on Sunday in the Département de l’Oise Freestyle in the Young Riders CDI. Achieving 76.240%, she was ahead of Spain’s Sergio Moron Basoco on Farnham L (75.645%). A noteworthy performance by France’s Mado Pinto, on the podium thanks to a score of 75.540% with his 10yo gelding, Hot Bit de la Gesse. Satisfaction for the French clan who had already rejoiced on Friday with Arthur Barthel and Bambino de Massa’s success in the Hôtel Mercure Team Test, and who finished sixth this Sunday (71.370%).

CDI Junior : Germany at the summit

Riding her Hanoverian, Nymphenburg First Choice, Germany’s Kelly-ann Klenk prevailed over the Région Hauts de France Freestyle in the Juniors, the day after having already enjoyed success at Compiègne in the Individual test. Behind her, Switzerland’s Meilin Ngovan with Dreamdancer (75.167%), and Belgium’s Jette de Jong on Heavenly Charming (75.133%), winners on Friday, shared the other steps of the podium a relatively long way in front of their adversaries which included France’s Maud Hebras, 8th with Senorita Rosa (70.300%).

“The result is very positive, declared Monique Marini, chairperson of the Compiègne équestre association, organisers of the event. After the difficult months, it’s rather like a new beginning. Despite the situation due to the health crisis we never doubted being able to organise the competition. We invite every other organiser to do the same because even if it’s bit of a challenge, it’s possible. We’d never have given up and only a total ban would have stopped us. Everything was achieved thanks to the support and loyalty of a formidable team. The public and private partners, service providers, volunteers, everyone joining forces made this show, held for the tenth time, possible. We were sad to have seen Denmark’s Cathrine Dufour being eliminated, but it’s a reminder of the difficulty of this sport where a horse and rider must be in perfect agreement at a given moment. But with Denmark and Sweden, who came with teams that are nearly those that will be going to the Olympic Games, we’ve had a little taster of what’s to come at Tokyo. Of course we’d have liked to celebrate our tenth anniversary with spectators, but we succeeded in adapting. The “family” of dressage was present, we were able to meet up and share again our love of dressage. Numerous riders and judges expressed their gratitude and thanks. That’s our biggest reward.”