And that’s three! The incredible trio of Patrik Kittel, Antonia and Juliette Ramel dominated the only French leg of the FEI Nations Cup. Already winners in 2018 and 2021, the Swedes are now adding 2022 to their record of achievements. Far behind, the Spanish and Belgian teams completed the podium. An unprecedented edition where the great names of dressage jostled each other in front of a packed Grand Parc equestrian stadium. If the Scandinavians obviously left their mark, Great Britains Charlotte Fry certainly turned heads! Partnering the outstanding Glamourdale, the Olympic team bronze medallist in Tokyo, won the Grand Prix Special – Eurovia as an individual, and in the Grand Prix Freestyle – Suez, one star chased another, for Isabell Werth, the most titled rider of all time, to add her name to the list of winners of the Internationaux de Dressage of Compiègne. 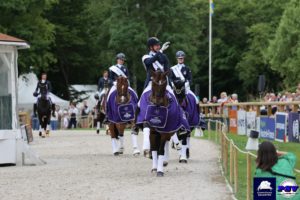 If Gold seemed to be already secured following the very good performances of Patrik Kittel, Juliette and Antonia Ramel, respectively 3rd, 4th and 8th in yesterday’s 5* Grand Prix, the three teammates dominated again today the Compiégne leg of the FEI Nations Cup. With 16 points on the counter thanks to Patrik Kittel’s 2nd place on Touchdown and the 2nd and 3rd places of Juliette Ramel on Buriel H.K and Antonia Ramel on Curiosity in the Grand Prix Special – Eurovia, they were once again on the top step of the podium. “We had a real head start this weekend,” said the Swedish chef d’équipe Bo Jona, “I’m really pleased with our performance. The riders did as well in the arena as they did whilst training, the horses are in good form and it’s very promising for the World Championships in Herning (Denmark – August 2022) as well as other major events to come. A victory in 5* at the beginning of the season is very motivating for the team. This competition definitely work for us !”

The Spaniards led by Jorga Carrascosa and Laponia, 5th today in the Grand Prix Special, were second with 48 points. In third place with 51 points, the Belgian team was able to count on the presence of the Belgium’s national champion, Larissa Pauluis. With Flambeau, the rider who was recently 2nd in the GP Freestyle at the Opglabbeek CDI4*and 3rd in the one at Lier, gave a very good performance and took 4th place in the GPS (71.553%).

The rising star of British dressage, n°7 in the World ranking, never ceases to impress! 3rd in the team competition and 11th in the individual competition at her very first Olympic Games (Tokyo 2020) with Everdale, the rider based at the Van Olst stables has experienced a meteoric rise in the discipline. Associated this weekend with the extraordinary Glamourdale, who won the 7 year old World championships and who was making his first steps at 5* level, the rider had the pleasure of taking the lead in yesterday’s Grand Prix Barriquand against the legendary Isabell Werth, then again this morning in the Grand Prix Special – Suez.  If Saturday’s victory was unquestionable with 79.435%, today’s few faults could have cost her the lead. With 76.638% awarded by the jury, she nevertheless won ahead of the Ramel sisters, Juliette and Antonia, who finished on 75.277% and 72.043% respectively.
“I felt he was a bit more tired today, maybe a bit less connected, we had some small misunderstandings, but I’m really proud of him! Three years ago we won the Petit Tour here and now the 5*! It’s so promising for the future. It’s a competition that I really enjoy, the site is superbly renovated, the arenas are perfect and there’s always a great atmosphere. All the riders will tell you the same thing!” confided Charlotte.  The French champion, Corentin Pottier, was the highest placed home nation rider. Riding Gotilas du Feuillard, the son of the legendary Totilas, he left the arena with 69.511% and 7th place.

It was necessary to wait for the last rider to enter the arena, and not the least, to know the outcome of the Grand Prix Freestyle – Suez. If the match between Isabell Werth, a true legend with multiple Olympic and World titles, and Patrik Kittel (SWE), the title holder at Compiègne, looked like being a close one, it equally had the merit of keeping the spectators on the edge of their seats right up until the very last moment. With 85.875%, the World n°6 with DSP Quantaz bought a stylish end to the 11th Internationaux de Dressage.. “I’m very happy. Yesterday I didn’t ask as much because I really wanted him to gain confidence, today I had in mind to take more risks and it worked! He’s great, a bit macho,” laughs the German, “but he’s very brave. He has a lot of personality, but if I can get him on my side like I did today, he’s fantastic!” Defeated with 82.025%, the World number 10 who was riding Touchdown, made do with 2nd place with a smile. “He did a great test today, with a lot of good moments and if he continues like this we can look for another 5-6 points. I’ve a new Freestyle in the pipeline, and I think it’ll suit him perfectly.”. By taking the 3rd place with 76.825%, Finland’s Emma Kanerva with Greek Air performed one of best tests of her career. Isabelle Pinto and La Gesse Hot Chocolate VD Kwaplas were 12th for France.

“This 2022 event is the one of all the rewards,” rejoiced Monique Marini, chairwoman of the Compiegne Equestrian Association, which organises the competition. “We’ve been working for many years to make the Internationaux de Dressage an unmissable event on the international scene. The line-up of riders present this weekend, with legends of the discipline such as Isabell Werth, Charlotte Dujardin and Adelinde Cornelissen, is the fruit of a long-standing team effort, and I’d like to thank them, as well as our partners, our volunteers and our service providers. The arrival of these huge names is a chance for both the athletes competing alongside them as well as for the public, who witnessed some magnificent tests. We were able to take advantage of the superb renovations of the Grand Parc equestrian stadium, and the beauty of the site was unanimously praised by the riders, and also by spectators, who were exceptionally numerous today to witness the outcome of the Nations Cup and the display by Jean-François Pignon.”