Patrik Kittel strikes again! Already winner this morning in the CDI3* Grand Prix Freestyle and the Grand Prix Special with Forever Young HRH and Blue Hors Zepster, this afternoon he helped Sweden to become the provisional leaders in the FEI Nations Cup in front of Spain and Belgium. Piloting the very good Touchdown, the big favourite of the Compiègne International Dressage Competition continues to impress taking 3rd place in the individual placings, behind Isabell Werth and the rising star of British dressage Charlotte Fry, victorious with the excellent Glamourdale who is taking part in his first CDIO5* at Compiègne. 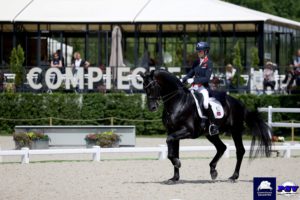 Charlotte Fry taking Glamourdale to the summit, Sweden the provisional leaders in the FEI Nations Cup.

Winners of the only French stage of the FEI Nations Cup in 2021 and 2018, the Swedish team of Patrik Kittel, Juliette and Antonia Ramel look set to make it a hat trick. With 10 points, well ahead of Spain (28 points) and Belgium (32 points), the 3 Scandinavians all made a strong impression, finishing respectively 3rd (76.043%), 4th (75.391%), 8th (71.956%), riding Touchdown, Buriel K.H and Curiosity. While nothing is ever certain, the aim is clear for Jo Bena, chef d’équipe for the leading nation. “We really enjoy coming to Compiègne and it’s an event that’s a good one for us (laughs). We’re well prepared and have horses that can make the difference, but the competition will be there until the end despite the withdrawal of the British and Dutch teams (Fiona Bigwood’s withdrawal and Adelinde Cornelissen’s elimination put their nation out of the competition). Patrik’s new horse Touchdown is very promising, Juliette’s horse Buriel has experience and proved it again this afternoon. Curiosity has not competed in many 5* with Antonia but is showing lots of good things in the arena.”

In the individual competition, the most titled rider of all time, the great champion Isabell Werth (GER), held onto the lead for a considerable time in the Grand Prix de la Ville de Compiègne. To the great pleasure of the spectators, she was riding for the very first time in the arena of the Grand Parc equestrian stadium with DSP Quantaz, and achieved a score of 76.870% as well as a 2nd place. “I’m very satisfied with Quantaz, we made two small mistakes but he was very concentrated and was listening to me. Compiègne is a great discovery, I’m very impressed by the site, it’s magnificent and we’re in great conditions for the competition!”

It was not until the 23nd rider out of the 32 and the entry of Charlotte Fry and her charismatic Glamourdale that the scores went up another notch. Offering breathtaking extensions, a very good technique both on the half passes and on the passage/piaffe/passage, the scores of the stars of the day shot up to 79.435% and they are awaited with bated breath tomorrow in the Special. “He was incredible today, it’s his first 5* and his best test so far!” confided the rider. “He enters the ring and knows exactly what he has to do. He’s even better than in the warm-up, he likes to show off, he likes the crowd. We made small mistakes here and there, and a big mistake in the pirouette, and we’ve things to work on but it’s very exciting for the future, I feel there is a lot more to come. We’ve reached 79 today, but when we solve these technical details, it’ll go even higher!”

15 starters in each Grand Prix and a profusion of stars to beat. On one side, the British who in the Grand Prix Special (GPS) lined up some of their best: Gareth Hughes, winner yesterday and the “two Charlotte’s”, Dujardin and Fry. On the other side in the Grand Prix Freestyle, Charlotte Fry again, who has brought 3 horses to Compiègne, but also the n°2 and n°3 in the qualifier, Sweden’s Jeanna Hogberg and Holland’s Karen Nijvet.

In the GPS, the World number 10 in duo with Blue Hors Zepter, who he has been riding for only a few months, performed a very good test, recompensed with 76.617% by the judges. A score that allowed him to win against Gareth Hughes on his bubbly Classic Briolinca, 3rd on 74.936%, and preceded by Charlotte Dujardin, 2nd with Imhotep on 76.064%.  The Olympic gold medallist has taken advantage of the event to introduce her young protégé to the international circuit. “I’m so pleased with Imhotep, he’s only 9 years old and you’d think he’s being doing this all his life! He’s very intelligent, very willing, he so much wants to do well that it can push him to make mistakes, but I’m here to guide him, I’ve got lots of hopes for him”. Charlotte Fry is 4th with Dark Legend (74.383%).

Last to go in the Grand Prix Freestyle – Brezillon, Patrik Kittel with Forever Young HRH came out on top again with 79.965% ahead of his compatriot Jeanna Hogberg on Astoria (78.750 %) and Charlotte Fry, who once more invited herself to a prize-giving ceremony, this time with Inclusive (78.600%). “I’m very proud of my horses, we haven’t been out much  with Forever and this was our first Special with Zepster and his first long Grand Prix yesterday, he came out on top of both. I’m really really pleased. For me it’s not so much about winning, it’s about having the right feeling. Forever was a little introverted when I started but she is starting to open up and take charge and Zepter was a bit anxious but we have been working on that. One is small and fast, the other much bigger with a lot of amplitude, I have to adapt to each one but I have to say that both impress me with their will to please and for me that’s the key. Winning is good, but it is fleeting. On the other hand, the preparation, the way the horses take you into the arena, the way they move, bringing them to their best level, that feeling of happiness is long lasting. I love winning, we all love winning but it’s a brief moment and I have to focus on what is next.”

“On the side of the home nation France, if the team is 7th in the provisional FEI Nations Cup placings, the junior Mathilde Juglaret has won once again in the CDIJ – Région Hauts de France (72.549%). At the commands of Caporal de Massa, the best French rider in the World rankings in her category was full of praise for her Lusitano. “Yesterday it got a bit complicated with the bad weather, today it was very hot, but Caporal remained unperturbed. I’m happy with our performance but we’re not at our best. I’m waiting for tomorrow so that we can get best in the Freestyle and try to raise the scores.”

In the Intermediaire I of the CDI2*, Dutch rider Seth Boschman and Flora de Mariposa RS2 OLD win on 72.892%. In the ponies and young riders categories, the leaders remain unchanged: Liezel Everars/ FS Capelli de Niro and Paul Jöbslt/Bodyguard 49 achieving 74.775% and 74.068% respectively. Last competition of the day, the CDI U25, German Paulina Holzknecht takes the lead with Entertainer Win T on 74,610%.

The highlights of Sunday the 22nd of May will be the conclusion of the CDIO5* – FEI Nations Cup with the Grand Prix Special – Eurovia starting at 9am and the Grand Prix Freestyle – Suez at 1.15pm. Following the prize-giving ceremonies, the general public will be treated to the equestrian show by the renowned Jean-François Pignon, invited by the city of Compiègne and its agglomeration to celebrate the inauguration of the magnificent renovations of the Grand Parc equestrian stadium.