Eight classes were on the cards on this second day of competition, which notably signalled the start of the Crédit Mutuel Nord Europe CDIO5*, a leg of the dressage FEI Nations Cup. Seven teams comprised of four riders and three riders invited to take part as individuals competed against each other in the first test, the Grand Prix – Ville de Compiègne. The opportunity to watch the performances of the World’s best athletes in this discipline and make ones own forecasts: will Great Britain remain in the lead? What strategy will France, currently 5th, decide on tomorrow?

Firstly 7 year-old young horses, tomorrow’s stars, took to the main arena for their final. Already having headed the preliminary test yesterday but equally winner at Saumur at the beginning of the month, the stallion First- Step Valentin (Vitalis x Fidermark) asserted himself, scoring 76.486% piloted by Belgium’s Larissa Pauluis. The pair led ahead of Elisabeth Geluk/Hamilton (NED) on 74.243% and Flore de Winne/Mac Donovan (BEL) on 73.415%.

The time that it took the sun to break through the clouds at the start of the morning, for the large number of public to settle themselves in the stands and the CDIO5* Grand Prix – Ville de Compiègne was ready to start. The field of 31 rode in front of the five officiating judges in order to establish the provisional leading nation. And it was Great Britain which placed themselves the top of the scoreboard with 14 points, in front of Sweden who totalled 17 points and the United States on 36 points.

The class itself was won by Sweden’s Patrick Kittel with Well Done de la Roche CMF who skipped through their test, winning over both the judges and spectators, and attaining the score of 77.283%. It was with a huge smile that the rider confided: « My mare was magnificent, she’s my favourite. I think it’s her best Grand Prix, she executed it perfectly, calmly, totally connected with me, she didn’t make any real mistakes. I think, with a little more experience in classes like this, we’ll most certainly get up to and over the 80%. Tomorrow, I’ll take part in the Grand Prix Special as she was a little tense because of the music at Hagen and I prefer to continue quietly bringing her on and not risk it. » 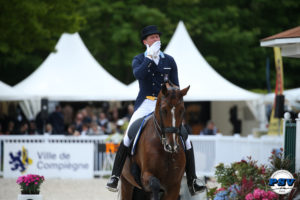 France is positioned temporarily in 5th place on 46 points. The best performing rider for the home nation, Morgan Barbançon Mestre, was among the top 8, scoring 71.783% on her Sir Donnerhall II OLD. She revealed as she left the arena: « I’m really pleased, but could kick myself for my fault in the two-time changes. »

Tomorrow, riders, divided between the Grand Prix Spécial – PAPREC and the Freestyle Grand Prix – Crédit Mutuel Nord Europe, will be rivalling each others’ excellence, in order to keep the lead or to win precious points and perhaps top the podium.

In the Prix St-Georges, Intermediate 1, the CDI2* – Prix Brezillon, Charlotte Fry (GBR) didn’t give her rivals a look-in. She again made sure her name was on the winners slot with Glamourdale, their score of 77.108% left the judges saying that they have never seen such a promising horse. Equally representing Great Britain, Jessica Dunn/Alicante Valley (72.843%) and Katherine Bailey/Boccelli 6 (71.912%) were 2nd and 3rd.

Gaining a place compared to the previous day in the Prix Barriquand, for Young Riders, Elizaveta Lyban (RUS) and Erantos claimed victory with 70.147%, in front of Laura de Graeve/Feuertanz (BEL) who was awarded 70.098% and Benjamin Ebeling/Behlinger (USA) on 70.049%.

Times, start-lists and results at https://www.worldsporttiming.com/results/timing-1105.html
LIVE streaming of the CDIO5* and the CDI3* on www.chevaltv.fr