Gently, magically, on Sunday the 22nd of May, when classes come to an end, Jean-François Pignon will celebrate the impressive renovations that have been undertaken at the Grand Parc Equestrian Stadium. All over the World, the trainer arouses the same emotions, the same wonder. For more than 35 years, the native of France’s Drôme region has been presenting shows on all continents, where the complicity with his horses in liberty offers a rare timeless moment. No need to be a skilled rider, no need to understand all the subtleties of dressage to appreciate his shows. Just let yourself go, let yourself be swept away.

To better understand the horse listen to him. “Like in England, where you have to speak English, you have to speak horse to them”, a sentence often repeated by Jean-François Pignon during conferences or the numerous training courses that he runs. He has been passing on this message for several decades now, on every continent but also on the screen through several films (Danse avec Lui, in 2007 with Mathilde Seigner and Samy Frey; Gazelle, an autobiographical film). Sharing is one of his values, and this is beautifully illustrated with his horses at each and every one of his shows. 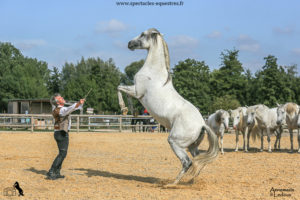