At the end of the Grand Prix, the first act of the Nations Cup at the CDIO 5* of Compiègne, Denmark and Sweden are neck and neck and should contest the final victory this Sunday. Following performances from three riders representing each country, a single point separated the two Scandinavian countries (the performances of each rider in the Grand Prix are added together to obtain a score for each team). If the individual victory of Patrik Kittel on his mare Well Done de la Roche CMF (78.065%) allowed the Swede to leave a lasting impression, the second place of Carina Cassoe Krüth on Heiline’s Danciera (77.0%) and the third place of the pair ranked number 6 in the World, Cathrine Dufour-Bohemian (76.500%) puts Denmark in a very provisional and fragile pole position. “I’m really pleased with Well Done de la Roche CMF, confided the day’s winner, always successful at Compiègne (already winner of the Grand Prix here in 2019 with the same mare). She can have a tendency to be nervous and even complicated to ride sometimes, but today, she behaved admirably. In these conditions, it’s a treat. In the Nations Cup, it’ll be a close battle with Denmark who also have an excellent team lined up, potentially that which will be at Tokyo in a matter of weeks now. This type of pressure make me surpass myself, and makes me want to go even further. There really is a great list of entries this weekend, the best teams are here and it’s a good preparation. Then, to repeat myself,  Compiègne is fantastically well organised, I’m delighted to be back here.” 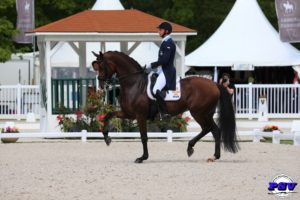 The third step of the podium will be very probably be played out between Portugal, currently third, Belgium and Great Britain (5th placed team despite the individual 5th place of Charlotte Fry riding Dark Legend), three nations who are all within 5 points of each other.

Sunday, the riders will contest, depending on the decision of their chef d’equipe, either the Grand Prix Special – Suez or the Freestyle Grand Prix  Crédit Mutuel Nord Europe. Sweden has decided to enter Kittel in the Freestyle. “Our team is on top form,  rejoiced Sweden’s chef d’equipe. They showed it today ! The horses were very applied, in good moods, everything went well. It’s a good sign for tomorrow ! To beat Denmark, we’re going to have to remain extremely focused, and more so than today. We’re at Compiègne to hone our choices for Tokyo, and it’s already a rehearsal for some.”  Denmark has opted to start it’s best two chances in the Special. “My strategy for Sunday is to try to not make any faults, stated Carina Cassoe Krüth. Compiègne is my last event before Tokyo and up to now I’ve very pleased. It remains however now to finish well, and I think to have prepared for that. On a team level, Cathrine was a little unfortunate this Saturday and without an error should have won. Sincerely, I think the Swedish should watch out (laughs).” The results of riders in these two classes are added to the scores of Saturday’s Grand Prix and determine the final outcome of the Nations Cup. Difficult today to decide on a favourite.

CDI 3* – The Grand Prix Special for Cathrine Dufour (DAN), the Freestyle for Johanna Due Boje (SUE)

Saturday morning Denmark’s Cathrine Dufour took her revenge in the Barriquand Grand Prix Special over Great-Britain’s Charlotte Fry who had dominated Friday in the Engie Solutions Grand Prix.  Riding Vamos Amigos, a powerful 12yo gelding, the World number 6 asserted herself and achieved a score of 76.489%, placing herself ahead of her British rival who was partnering Everdale, and who left the arena with 75.787%. Already third the previous day, Denmark’s Nanna Skodborg Merrald and Blue Horse Zack confirmed their position (73.170%).

Later in the day, as the sun started to go down at Compiègne, Sweden particularly distinguished itself in the Freestyle Grand Prix with an excellent double.  Johanna Due Boje took control and first place with the SWB mare, Mazy Klovenhoj (73.385%), followed closely on her heels by the experienced Tine Vilhelmson Silfven, who has bought to the show Devanto, a 12yo Holsteiner that she has only been riding since the start of the year (73.325%).

Only Nars Gottmer from the Netherlands with Goldenboy Vinckenburg, with a score of 73.215%, managed to get close the two Scandinavians. With his Lusitanian La Gesse Sultao Menezesa, Portugal’s Carlos Pinto wasn’t far off the podium (73.150%). As for the French, Marie-Emilie Bretenoux finished 8th with Quartz of Jazz (71.435%).

Switzerland’s national anthem was heard on Saturday at the Grand Parc equestrian stadium paying tribute to 23 year-old Charlotta Rogerson’s success in the Grand Prix riding the 11 yo KWPN mare Famora. Awarded a score of 70.684%, she finished in front of Dutchwoman Jeanine Nekeman on Ferrari (70.085%) and Portugal’s Francisco Vila Nova with Sir Saburo (68.632%). France’s Camille Audo took 10th place with Behroez (65.171%). Third and last rendezvous of the U25s CDI, Sunday, with the Eurovia Freestyle Grand Prix.

First, and second ! A Belgium double in the class of the day for Young Riders. Amber Van den Steen, on Fame (73.529%) asserted herself over her compatriot Karoline Sofie Vestergaard, with Juniot Hit (72.010%). The two 19 year olds shared the podium with Spain’s Sergio Moron Basoco who was riding Farnham L (70.980%).

Finishing on a final score of 72.402%, Germany’s 17 year-old Kelly-Ann Klenk rode the best test in the Juniors. Partnering Nymphenburg First Choice, she made her presence felt in front of a Swiss duo, Meilin Ngovan on Dreamdancer (71.912%) and Tallulah Lynn Nater with De Vito W (70.245%), who were already on the second and third steps of the podium the day before. France’s Maud Hebras finished at the foot of the podium with her mare Senorita Rosa (68.823%).

In the ponies, by placing three of it’s representatives on the podium, and indeed six of the places in the top 10, Germany proved yet again their supremacy in the discipline. Like on Friday, Julie Sofie Schmitz-Heinen gave the best performance partnering Carleo Go (75,361%), followed by Maleen Kohnle on Dabia Dior (74,730%) and Antonia Roth with Daily Pleasure We (74.504%)