British team reigns in the heart of the Compiègne forest

A technical and artistic show, a convivial atmosphere and mild weather, despite a forecast saying otherwise… Everything was there for the best dressage riders on the planet and the spectators that came to Compiègne this Sunday. Overnight leaders, the four athletes from the other side of the English Channel did everything in order to maintain their lead and take victory, in front of Sweden and the United States of America. Individually, Gareth Hughes with Classic Briolinca (GBR) and Emmelie Scholtens riding Desperado (NED) took respectively the CDIO 5* Grand Prix Special and Grand Prix Freestyle. 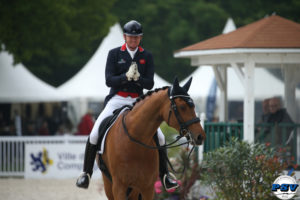 The British team secured their lead in the Grand Prix Special – PAPREC. Gareth Hughes, 3rd in this same class in 2018 and 5th in yesterday’s Grand Prix, won convincingly, overtaking the previous days’ leaders Patrik Kittel and Carl Hester. Piloting Classic Briolinca, he rode a test awarded 77.170% leaving the other two steps on the podium to the Swede who was riding a less relaxed Well Done de la Roche CMF, and performed a test punctuated by a few faults (75.638%), and to his team leader partnering Hawtins Delicato, and who also left the arena with a few inaccuracies (75.319%).
As for the French, performances were not as hoped in this second test, Arnaud and Anne-Sophie Serre being placed 11th and 12th respectively with Ultrablue de Massa (68.319%) and Vistoso de Massa (67.766%). 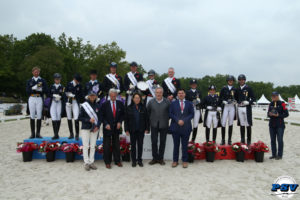 Next, the Freestyle Grand Prix of the CDIO 5* FEI Nations Cup – Crédit Mutuel Nord Europe, always fascinating for the public watching in the stands, provided its share of thrills and excitement. Modern rhythms perfectly practised, scores exceeding 80%, the crowd set alight and a British team that withstood the pressure to take the only French leg of the Nations Cup in front of Sweden and the United States… what a 2019 conclusion!

The team results in this Compiègne stopover were the following: 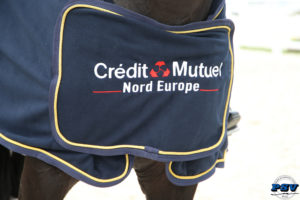 Individually, Netherlands’s Emmelie Scholtens, 8th in the World Cup Final last month, broke through the 81% barrier, a score never seen before at Compiègne. With her sublime black stallion Desperado, the pair sailed through this artistic and musical test achieving 81.585%: “To be honest I didn’t expect it at all, especially as Helen had entered the same class. Desperado still needs more experience and we were surrounded by very experienced partnerships. I started with the aim of trying to battle for second place but… surprise! (she laughs) I think Desperado and I like Compiègne, in any case this venue bought us luck for our first time”.
Helen Langehanenberg (GER) thus finished 2nd with Damsey FRH, giving a performance judged at 80.775%, whilst the extremely nice American, Shelly Francis on Danilo was placed 3rd (79.610%).

France’s Morgan Barbançon Mestre, already 8th in yesterday’s Grand Prix gave her second best performance since taking the ride on Sir Donnerhall II OLD. The pair installed themselves in 5th place with a score of 76.240%. Her fellow team member Stéphanie Brieussel on Amorak finished 15th with 67.620%. The reaction of the national selector, Jan Bemelmans: “ Morgan did her job during the two tests. In the Grand Prix she made a small mistake in the two-time changes but the rest was very good. In the Freestyle, she rode well with music that really suits the pair. Stéphanie rode a very good Grand Prix, making no mistakes, she did what was expected of her. In the Freestyle, it wasn’t as good as we hoped as Amorak was a little on edge. As for Anne-Sophie and Arnaud, they made mistakes in the two tests, I know they can do a lot better. More work is needed. The next date will be mid-June at Geesteren (NED).”

Opening this final day, competitors in the CDI 3* rode their Grand Prix Special which was sponsored by Suez. Already receiving the accolade in the Grand Prix and although saying she still needs to improve certain points, Malin Wahlkamp-Nilsson, who’s trained by Patrik Kittel, yet again stood out with Eddieni, this time receiving a unanimous vote from the judges. With the score of 72.936%, she was ahead of France’s Charlotte Chalvignac/Lights of Londonderry who scored close to 70% (69.957%) and Belgium’s Jeroen Devroe/Eres DL (69.191%).

In the categories for younger competitors, Lara van Nek (NED) left her opponents little chance scoring four victories in three days. Already heading the leader-board yesterday with Brouwershaven’s Nairobi in the Pony category, she dominated in the Freestyle with a score of 76.933%, in front of the British duo of Annabella Pidgley/Cognac IX (76.925%), Floor van der Kuijl/Castenrayseweg’s Dreamboy (NED – 75.983%) was third. She also took the Children’s title in the Prix Suez riding Amazing Comeback (72.083%), this podium was completed by Belgium’s Alexander Goovaerts/Habiba VH Bloemenhof (68.214%) and Zara van Rijckeghem/Fairy Queen (67.857%).
Top flight performances again in the class for Juniors held under the colours of the Département de l’Oise, with Spain’s Natalia Bacariza Danguillecourt, who really took command of the section this week-end, again heading the class with Romantico Ymas (75.075%), in front of Amber van den Steen/Fame (BEL) who was awarded 73.058% and Mado Pinto/Sirano de Luxe (FRA) with 72.325%.
Finally, Britain’s Rebecca Swain concluded in the Prix Eurovia for Young riders by riding Bon Jovi and achieving the score of 73.717%. France’s Capucine Noël with Soleil Noir vom Rosenhof (73.433%) and America’s Callie Jones in the saddle on Don Philippo (73.042%) closely followed.

Yet another superb edition of the Internationaux de dressage of Compiègne draws to a close, an event which will have been enjoyed by the 200 riders taking part and a real source of pride to the organisers, the Compiègne Équestre Association. Indeed, Madame Monique Marini, the Chairperson concluded : “This 2019 event was the continuity of what we have built over more than 10 years. The riders receive a good welcome with quality surfaces to ride on, comfortable stabling, top class catering, which are very important points in order for athletes to work correctly. There’s excellent conviviality, it’s one of our points of honour. For the future, we wish to continue developing, keeping the sections for the younger generations alongside the 3* and 5*, so they are impregnated with a top level international context. We’ve had great sport and thrills this year and we’re already impatient for the 2020 event! »

All results can be found at: https://www.worldsporttiming.com/results/timing-1105.html