A 100 days before the stars of Dressage return to Compiégne

The Grand Parc equestrian stadium will be hosting for the twelfth time the Internationaux de Dressage de Compiègne from the 4th to the 7th of May 2023. Alongside the prestigious CDIO 5* and its FEI Nations Cup which every year attracts the elite of the dressage world, a CDI3*, a CDI1*, and four international classes for the younger generations, will bring to life the different arenas. A display by the World renowned Santi Serra Camps, will bring the event to a flourishing conclusion. 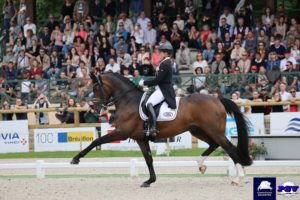 Looking down the list of past winners at an event is often a reflection of what to expect from a competition. The Internationaux de Dressage of Compiègne are a great illustration of this. Last year, Isabell Werth, the greatest champion in the history of the discipline, won the Freestyle Grand Prix with DSP Quantaz. In the Grand Prix, victory went to Great Britain’s Charlotte Fry riding her exceptionnel Glamourdale, a pair who went on a few weeks later to dazzle the crowd and take gold at the World Championships in Herning (Danemark). In the CDI 3* Grand Prix Special won by Patrick Kittel, another of Great Britain’s stars, Charlotte Dujardin, Olympic and World multi-medallist, was present with her young Imhotep. Also figuring among the top placings, Holland’s Adelinde Cornelissen, another dressage rider with a XXL sized track record.

Every year, top dressage riders meet at the Grand Parc equestrian stadium. Last spring, beyond the sporting dimension of the event, everyone underlined the quality of the setting, which has been entirely renovated after lengthy work carried out as part of the policy of preparing for the 2024 Olympic and Paralympic Games. They will be welcomed back from the 4th to the 7th of May where the 5* CDIO will be the second out of the six stages of the prestigious FEI Nations Cup circuit, after Wellington (USA, 22-26 February) and before Budapest (Hungary, 7-11 June), Rotterdam (Netherlands, 22-25 May), Aachen (Germany, 27 June-2 July) and Falsterbo (Sweden, 13-16 July). Far ahead of Spain and Belgium, Sweden, led by the great champion Patrick Kittel, who has been loyal to the Compiègne event for many years, will no doubt be determined to defend and conserve its title. ‘’There’s always a great line-up in Compiègne with the top teams’’, says Kittel. ‘’On top of that, Compiègne is fantastically well organised and I’m always very happy to return.’’

For all the nations, starting with the French team which is currently undergoing a number of changes, the event will be a great opportunity to review the squads in preparation for the European Championships in Riesenbeck (Germany, 4-10 September 2023), with sights already set on the 2024 Paris Olympic Games. This is a great opportunity not only to score points with the selectors, but also to make an impression on the judges.

With its’ CDIO 5* FEI Nations Cup, CDI3*, CDI1*, CDI U25, CDIYR (Young Riders), CDI Juniors and CDI Ponies, the Internationaux de Dressage of Compiègne is the highlight of a particularly intense spring for the Grand Parc equestrian stadium with the venue also hosting two major show-jumping events, the Compiègne CSIO, from the 27th to the 30th of April (CSIO Ponies, children, juniors, young riders and U25s) and the Compiègne Classic, from the 12th to the 14th of May (CSI 3*, CSI 1*, CSIYH* and CSI Am).

A SHOW BY SANTI SERRA, THE GRAND FINALE OF THE EVENT

Following three days of great sport, spectators will be able to enjoy a show on Sunday the 7th of May that is also marked by excellence: “the whisperer”, “the magician”, “the animal charmer”, “the boss” or even “the teacher”. All over the world, the nicknames attributed to the equestrian artist Santi Serra testify the enthusiasm generated by each of his performances. On every continent, he fascinates the crowds with his animals, with the love he transmits to his horses, his dogs and his birds. One week after a demonstration in one of the biggest Spanish shows, in front of 28,000 spectators, and just before flying off to North and South America, Santi Serra will be present in Compiègne, at an event that is bound to be special, in front of a warm and welcoming French public.